Residents of a Chinese village are oppressed by a band of mean Japanese ronin led by James Nam Gung-Fan. Kung fu schoolteacher Fang Mian beats him in an official fight in the ring, but is later massacred by sword-wielding minions. His son grows up to be vengeance-seeking Chuen Yuen. He trains in the mountains with the extremely cute Shih Szu. After some time-wasting subplots involving fighter Tung Lam, his wife Wong Gam-Fung, harmful gossip and a hidden kung fu manual, things get right on track when Nam has Chuen’s right arm maimed by hot coals and the ligaments in his shoulder sliced. Chuen trains his left arm by smashing small wooden arm replicas, and his feet get so strong he can kick down a tree. Although it takes a while to get cooking, the bloody finale with some outrageous moves from Chuen will make you glad you sat through this Shaw Bros production from that interesting era between late-60s swordplay and the more balletic and accomplished screen martial arts of the mid- 70s onwards. 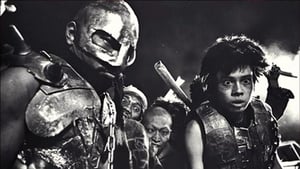